The DEC PDP-1, a small mainframe computer for real-time applications introduced in 1959 by the Digital Equipment Corporation, was one of the first commercially available machines to come with a visual display. In 1961, one of the first production models was donated by DEC to M.I.T., which became the first digital computer ever to run a video game. A fully restored PDP-1 is on display at the Computer History Museum in Mountain View, California (USA).

“Spacewar!” is the first known digital video game, featuring orbital mechanics around a gravitational star for two human players and their virtual spaceships. Spacewar! was conceived in 1961 by Martin Graetz, Stephen Russell, and Wayne Wiitanen at M.I.T. and was first publicly shown in May 1962. – Run the original program directly in your browser!

In 2016, I did my very own game for the DEC PDP-1, a simulation of the very first coin-operated video game, “Computer Space” by Nolan Bushnell and Ted Dabney (1971). Computer Space was inspired by Spacewar! on a PDP computer (hence the name of my game), but features a time limited gaming experience for a single player.

Some games of my own. These games started once, in 1996, as one of the first arcade games using only generic browser technologies (first available with with Netscape 3.0) and a few even enjoyed some public recognition – e.g., the first version of “JavaScript-Invasion” could be found at USA Today’s Marketplace. Games have been updated continously over the following years to reflect the respective state of the art.
Contact me for customized version or other games for your website. 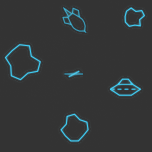 A “Spacewar-for-one” as a tribute to the classic line of heritage of space shooter video games, combining elements of Spacewar!, Computer Space, and Asteroids.
Think of it as a “Spacewar trainer” or a Spacewar-for-one.
(2019) 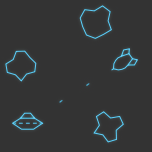 Another new old-school game, similiar to “Outer Orbit”, but here, instead of the central star, it's the asteroids that excert their individual gravity field on the spaceship. Can you navigate the asteroid field and out-compete the flying saucers?
(2017–2021)

A fully featured 3D-Pacman in bare bones JavaScript!
Adding another dimension to Pac-Man.
(2008)

Robby vs. The Tin Toy Bots.

Yet another 3D-Pac-Man clone, featuring a retro space age theme. Help Robby the Robot against some evil conehead robots. (2008)

Robby vs. the Conehead Bots.

The second sequel to “Lost in Maze!”:
With battery operated walking action… (2009)

Pac-Man – a bit different:
This time Pac-Man is in for some crosswords
(2012)

And now for something completely different:

The ultimate text-mode Pac-Man in text adventure style.
An homage to the IF works of the late 1970s and Pac-Man.
(2006)